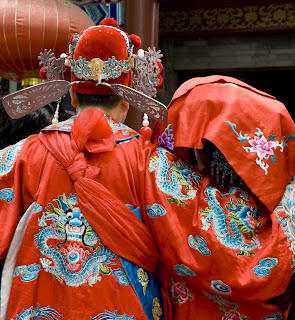 It is a known fact that single Chinese men already outnumber single Chinese women quite dramatically. Another known fact is that extra-marital affairs by husbands are very common in Chinese marriages; hence the increasing divorce rates in the country. Then there are the sheng nu, or leftover women, who are intentionally left out of the marriage market; but that’s a different Chinese dating paradox altogether. The pool of “suitable”women from which single Chinese men choose a mate is already extremely limited; and yet, many husbands are still able to get mistresses! Go figure.

There’s more than one paradox in Chinese dating, but they all stem from the same obstinate (and sexist) attitude of men in China and Chinese society as a whole toward the selection of a partner. This attitude is built upon the strictly traditional standards against which women are measured as suitable or unsuitable as wives.

First, there is a maximum limit set on the age by which women in China should be married; if they’re still single by the time they’re 30, their desirability as a wife greatly declines and only continues to do so the longer they remain unmarried. Excluding women in their 30s and older already narrows down considerably the pool of “suitable” potential wives that they can choose from.

Second, Chinese men prefer a partner who is less successful and/or educated than them. There are some who are willing to marry a woman whose career/financial success is equal to his. Given that many women of China today have obtained higher/university education and achieved great successes in their chosen profession, or are, at least, financially stable, this condition of “lower qualifications” narrows down their choices even more.

Third, divorced women are often rejected, regardless of their age. They are practically considered “spoiled goods.” Given that many Chinese women are choosing to divorce their unfaithful husbands, more women are also being added to the “leftover pile.” As if the considerable imbalance in gender populations is not enough to make finding a wife in China difficult enough, single Chinese men willfully limit their choices further with their limited perspective on what a “suitable wife” is. At the same time, those already married still manage to engage in extra-marital affairs!

Which makes one wonder; do these extra-marital affairs only involve prostitutes? If so, do some of these women turn to prostitution because they can’t find a husband to support them? If some of these affairs involve women who are not prostitutes, do they choose to engage in these affairs because they also can’t find a husband to support them? Or are these mistresses the stereotypical gold diggers who can’t find a “suitable” husband because of their high standards, so they simply get the luxuries they desire wherever they can?

This last paradox, for a change, is not directly related to the strict adherence to standards of mate selection, which are no longer suitable given the many changes that modern-day China and its modern-day women have been undergoing; but it still aggravates the problem of gender imbalance and the sheng nu phenomenon.

The fact that unfaithfulness to wives is still widespread, and even widely accepted, in China, seems to imply that the society and the male population (the married ones, in particular) are not aware of the ever-increasing seriousness of the inequality in gender populations in the country.

Obviously, taking mistresses (particularly those who aren’t prostitutes) means there are even less eligible women in China’s already strained marriage market. Unless, of course, the unfaithful husbands choose to marry their mistress when their wife divorces them, not only do they add to the number of unmarried men competing for women; they were also instrumental in dwindling the numbers of “suitable wives” even further and in increasing the number of “leftover” women.

Women who engage in these affairs with married men also contribute to the problem of gender imbalance twofold in the exact same way that the unfaithful husbands do.

Dating in China can be a very complicated affair, especially given the many modern-day challenges that the People’s Republic now face; at least, it can be complicated for the single Chinese men and women. For foreign men who desire a Chinese wife, Chinese good fortune can be had. Many ladies of China are unhappy with the quality of men in their country (mostly because they don’t know how to treat their women/wives well); those who are considered “unsuitable,” in particular, seek foreign men as a potential partner.

Given that these women’s supposed unsuitability are based on narrow perceptions of a woman’s worth, they are actually still highly desirable for foreign men.

Posted by ChinaLoveMatch at 7:43 AM