Food for Thought on Dating a Chinese Woman 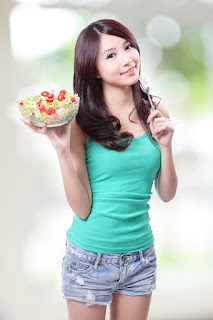 When dating a Chinese woman with the goal of making one his wife, a foreign man, often, does not take into serious consideration (if it even crosses his mind) the issue of food.

Just like breathing, eating is a natural process that we often take for granted, not in the sense that we just eat simply for nourishment and we only eat what our body needs; our many diet-related health problems are incontrovertible proof of just the opposite. But many of us take for granted how much our eating habits and food preferences actually factor into our daily lives.

For Chinese women, for example, imagine not being able to eat rice and/or noodles for a few weeks or a few months. Foreign men working in China have undoubtedly experienced cravings for certain foods from back home. What more if a person’s diet is very specific or his/her eating habits and food preferences are very strict?

Any foreign man who is seriously considering moving to China to pursue his dream of having a Chinese wife or after he has met the love of his life should also seriously consider very early on, while he’s still dating Chinese women online in fact, the drastic changes to his diet that his move will entail.

One of the most important things he should realize, especially if he is a health-conscious individual, is that Chinese food is not as healthy as it used to be. In fact, one will find it very difficult to find healthy food options both when eating in Chinese restaurants and at home.

The Chinese are simply completely dependent on MSG (monosodium glutamate, a chemically-altered salt) when they cook. They sprinkle MSG on all their dishes to enhance the flavor. In fact, it would not be an exaggeration to say that without MSG, Chinese food would just be flavorless. MSG has been found to be addictive, cause obesity, and alter brain chemistry to the point of irreversible damage.

Chinese cooking also often involves using very generous amounts of oil. To make things worse, the oil is often reused many times over than what is considered safe. And as if that is not bad enough, smaller Chinese restaurants have been found to use gutter oil, or oil that has been processed from kitchen waste (such as decomposing animal fat and organs) collected from the larger restaurants drainage.

In fact, this practice has become so widespread and poses such very serious public health risks, that the government has recently made the manufacture and selling of gutter oil punishable by death. It is encouraging that the Chinese Government has now made unhealthy food a top priority and is cleaning up the problem at a breakneck pace, and what is a serious health issue today may well be gone in a decade or less.

Another thing a man may want to think about is the possibility that he and his future wife may be completely incompatible when it comes to food preferences. Of course, this would be a more serious problem for the man if he wants to move to China but he simply does not have the palate for Chinese food.

It would be easy to say that the husband and the wife can just each eat their preferred food every time they share a meal; it shouldn’t be too hard to prepare different dishes. Even when the foreign husband has chosen to live in China or the Chinese wife to live in her husband’s home country, they can find a way to still have a taste of home, so to speak.

Well, for some couples, eating together may not mean more than just the simple act of sitting down to dinner together. Every single night, or a few nights a week, they may be eating different foods, but this can be seen by both as no big deal and no different from eating out and ordering different foods, too.

If this is the case, then, incompatibilities in food preferences may also pose a serious challenge to the relationship. Not being able to literally and figuratively share a meal with each other every single day can make one or both feel estranged from each other. When shared meals are supposed to provide opportunities to bond, to bring them closer, and reinforce the strength of their relationship, it causes feelings of separation from each other, instead.

If you are dating a Chinese woman, these thoughts may just be something to “nibble on;” or they may be chunks of food for serious thought. Learn more about Chinese culture, Chinese women, and Chinese dating on the blogs, magazine and forum of ChinaLoveMatch.net (the home of safe Chinese dating), where international men and Chinese women share their life experiences and bare their souls to give you the real goods on love, cross-cultural relationships, and all things Chinese.

Posted by ChinaLoveMatch at 10:11 AM